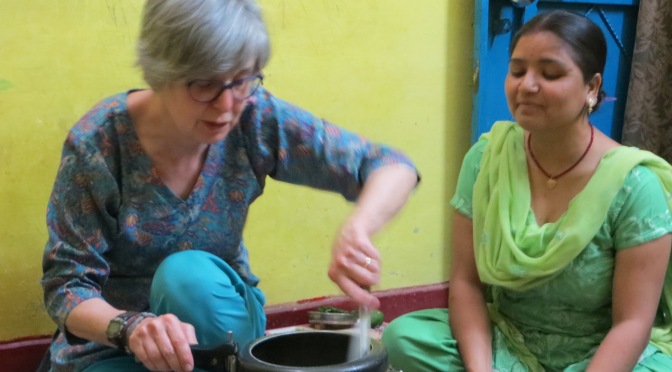 Imagine being invited into someone’s home in India for a meal. Imagine that the hostess shows you how to prepare her favorite dishes and then sends you home with the recipes. We had the great pleasure of doing just that in the small town of Orchha.

A few of the members of our group, Siobhan, Frankie, Matt, Ken and I, accompanied by Raja, headed over to Rajni’s home at supper time. She was waiting for us on the doorstep and invited us into her living room where she had set up a cooktop and laid out all the ingredients for the various dishes she planned to show us. The room is painted a cheerful yellow and the shelves hold a collection of teddy bears, probably belonging to her two young sons.

She started by preparing masala tea, a traditional Indian spiced tea. Each household has its own recipe for masala tea and it can even vary with the seasons. Usual spices include cardamom, cloves and cinnamon.

Rajni then began preparing the meal while we furiously took note of the ingredients and instructions. She made an eggplant curry, a pumpkin curry (with Frankie assisting), a mixed vegetable rice (with me helping out), a mango chutney, a bundi riata which is a flavoured yogurt containing small chickpea nuggets and coriander, and a dahl fry – yellow lentils with vegetables. We learned that, in Indian cooking, the most common spices include cumin, fenugreek, asafetida, turmeric, coriander, red and green chili peppers and garam masala. All her vegetables were fresh: eggplant, pumpkin, tomatoes, peas, red onions and garlic. To accompany the meal, she prepared three types of bread, spinach poori, chapatis and papadams. Ken and Matt used small rolling pins and wooden boards to roll out the poori before Rajni fried it until it puffed up nearly to bursting.

The best part came when we all enjoyed the wonderful dishes. The food was so good, I forgot to take pictures. Each dish tasted fresh and delicious. All the flavours married together wonderfully. Even though Rajni had added a fair amount of chilies in some recipes (at least for my Western pallet), nothing was spicy hot. We all agreed that it was by far the best Indian meal we’d ever eaten.

We felt so honoured to have been invited into Rajni’s home to share this evening with her. If you’re ever in Orchha, you can visit Rajni too. She regularly hosts such dinners in her home. Contact her at rajni_orchha@yahoo.com