Travelling by road in India is an entertaining experience. What would you think if you saw a tractor heading towards you in the fast lane of a divided highway? As a driver, what would you do? Indian drivers remain totally calm. They simply move to the left and give way the oncoming vehicle. (Remember, cars drive on the right in India.)

We rode a bus on some of India’s major highways, including a stretch of the busiest one in India, National Road 8 between Delhi and Mumbai. The largest vehicles are trucks cobbled together from truck cabs and cargo containers. There are also regular trucks, tourist buses, intercity buses of various sizes, tractors, cars, tuk-tuks, motorbikes and scooters. Then it gets interesting – camel-drawn carts, usually sticking to the edge of the road, herds of cattle, and even a herd of sheep that was in the process of crossing the highway under the watchful eye of their shepherd. I wish I had pictures of them all. 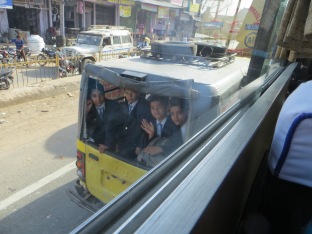 On the highway from Agra to Jhansi, we saw a pilgrimage; hundreds of pilgrims heading towards us on the other side of the highway. Most had only the clothes on their backs. From time to time, a truck accompanied them mounted with huge speakers blaring religious chants.

Raja, our guide, told us that they’ve remixed Hindu hymns with modern beats and it’s replacing the chanting people used to do. To avoid the crowds of pilgrims, some drivers chose to drive on our side of the highway, against the traffic. We were driving in the fast lane. Suddenly, we began seeing trucks and cars heading towards us at speed in our lane! Our driver calmly moved over to let them by.

That’s the way here, no road rage, you just make it work, we’ll all get there in the end.