One of the activities on this trip that stood out on the agenda was an overnight train from Orchha to Varanasi. Trains in India carry 27 million people every day, about 2/3 the population of Canada. They offer many classes, from compartments with locking doors and private bathrooms to carriages outfitted with benches and no reserved seating. Air-conditioning depends on the class.

We boarded our train about an hour late, not unusual for Indian trains. Raja had warned us to move quickly once the trained pulled in, it only stopped for five minutes and there were hundreds of people getting on and off.

Bob, one of our group members, had hired a porter for his luggage. The porter knew where the train would stop on the platform and where our B1 and B2 carriages would probably be. Each of us had our assigned reserved bunk. Mine was number B2-34, the middle of a tier of three bunks.

Here is how our three-tier AC class sleeper car was set up. There are no doors or curtains for the bunks. On one side of the aisle, a top berth and a lower berth with about five feet of clearance between them lie parallel to the carriage’s central aisle. On the other side are six bunks perpendicular to the aisle, three to a side. There is only about a three-foot clearance between the bunks, so you can’t sit up on your bunk.

During the day, the middle bunk drops down to form a backrest for the lower bunk that becomes the bench where three passengers can sit. At bedtime, you make up your bed and crawl in. Each passenger is issued two clean white sheets, a pillow and a woolen blanket.

When our train pulled in, we gathered our luggage and quickly headed to the doors. The general chaos of boarding ensued. People were getting aboard before those leaving the train had had a chance to exit. Large bags and luggage were pulled through the crowd. The aisles were full of passengers trying to figure out their seat or bunk, finding a place to stow their luggage and prepare for the night. Since it was already midnight, many already on board where lying down on their bunks. If yours was an upper bunk and the lower one was already occupied, there was little room to organize your luggage and get set up.

Suitcases and larger bags can be stored under the lowest bunk. There are metal rings to lock them up, so long as you brought a chain. The safest place for your valuables is with you on your bunk.

Aman was already in the compartment when the four of us arrived. He observed our general disorganized attempts to figure out what we should do and moved across the aisle to the empty bottom bunk to give us more room. As we continued to fumble, he came to the conclusion that he could help us. He introduced himself and very kindly showed us where the sheets and blankets were, helped us set up the two middle bunks, and told us that the A/C gets quite intense at night and we should keep our blankets on our bunks. He seemed an old hand at this and we appreciated kindness. Once we were all settled in, he nimbly hopped up to his bunk and settled in for the night. 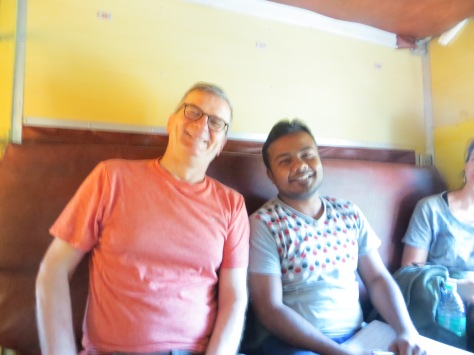 I had serious doubts that I would get any sleep that night. I’d never spent a night on a train and this was not the most comfortable set-up with little headroom, no privacy and having to share a narrow bunk with my daypack and its contents. To my surprise, as soon as I put my head down, I went to sleep. The next thing I knew it was 8 the next morning! I had the best sleep I’d had since the trip began.