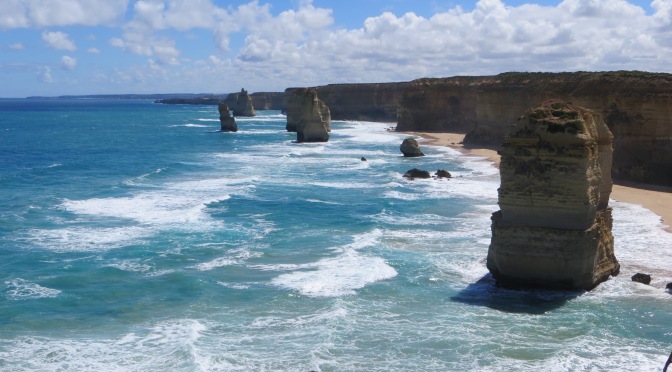 The feeling I got when we arrived at the 12 Apostles was similar to how I felt when we arrived at the Grand Canyon. First, like at the Grand Canyon, the landscape around is mostly flat and you’ve got to walk to the edge of a cliff to take in the view. Secondly, there’s the parking lot filled with cars, camper vans and tour buses of all sizes arriving and leaving. Finally, there’s the people, streaming towards the viewing platforms or returning from them.

Naturally, there’s a visitor centre, a gift shop, and a snack bar full of visitors milling about. There are interpretive signs along a marked path, including ones that remind people to stay on the path because the cliff edges are unstable.

All this activity creates a buzz and a feeling of excitement, after all we’re about to see one of the great natural wonders of the world.

Places like this are a dilemma for me. They offer spectacular sites and I’m inspired by their grandeur, but the crowds seem out of place. There should be solitude in such grandeur. I need to remind myself that natural beauty is bound to attract people. Plus, the more of us who see and appreciate these places, the more we will value them and seek to protect our world.

And it’s truly spectacular when you finally look down upon those limestone stacks just offshore, their irregular shapes the result of thousands of years of erosion. Most are about 50 metres tall and stand like sentries facing the incessant wind and waves of the Southern Ocean. It’s a losing battle, the ocean has already taken four of the 12, but in time more will be created from the very cliffs we’re standing on. 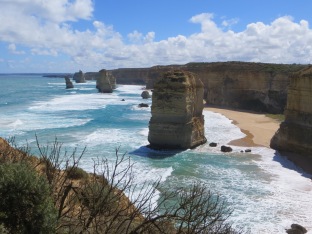 Standing in the crush of tourists trying to get the perfect selfie, I couldn’t help but think how lucky we were to have gotten insider information the day before from a local surfer named Luke. During lunch at Fisho’s, an oceanfront diner, Luke sought us out and used his receipt book to list a few places he thought we should see. One of them was Gibson Steps, 86 steps carved into the cliff face by a settler named Hugh Gibson. They bring you down the 50-metre cliff to a beach near two impressive rock stacks named Gog and Magog. They’re not officially part of the 12 Apostles but could be. We were nearly alone on that beach and those few who had climbed down the slippery, irregular steps were friendly and chatted easily with each other. 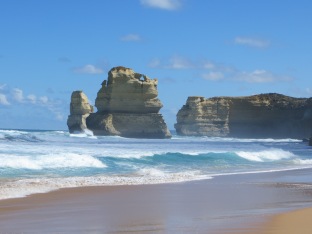 The beach at Gog and Magog 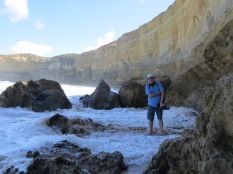 Ken in the wake 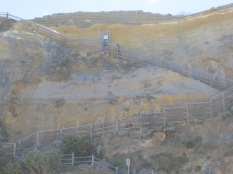 While we admired the rock formations off-shore and the powerful waves crashing into them, the tide was rolling in and we all had great fun dodging the breakers and estimating how long we had before the ocean waves reach the cliff and cut off our exit.

2 thoughts on “Pilgrimage to the 12 Apostles”