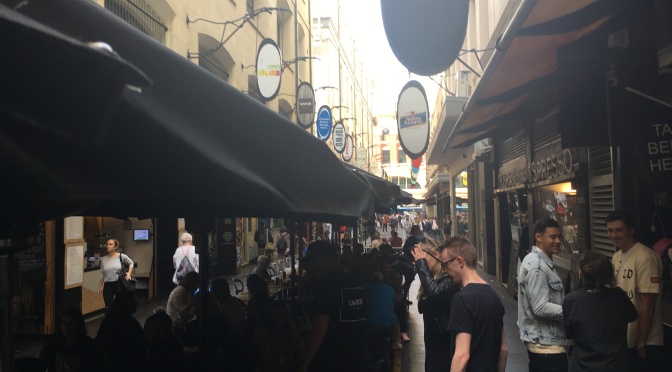 With its narrow laneways overtaken by cafés, restaurants and boutiques, Melbourne has a unique vibe.

What’s really fun is that the laneways are not only for tourists, they’re full of locals heading to and from work, stopping at their usual place for a flat white coffee or sitting with friends. Men and women are dressed to the latest fashion, nothing I’ve seen in Ottawa yet. Women wear high-waisted cropped palazzo pants, men wear skinny pants, rolled up and showing bare ankles. 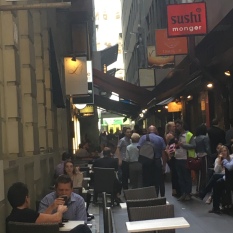 Added to all this, I found Melbourne a friendly place. Here’s an example.

We were looking for a restaurant when we spotted a small one with a line-up out the door and onto the sidewalk, a good sign to our eyes. At Don Don Japanese Restaurant, service is fast even if the line up is long. You order at the counter, we both ordered the bento box: teriyaki chicken, sukiyaki pork, rice and salad. No receipt, no ticket, the cashier told us we’d be called when the food was ready. She said she’d remember us and she did.

All the tables were taken so we asked to share with a woman in business attire. Nearly as soon as we sat down, she struck up a conversation. She began by telling us this was the best restaurant in town to get a meal under $10. She recommended that the next time we eat what she was having, sashi don, salmon with rice and vegetables.

We chatted about Melbourne and Canada while we ate. She introduced herself as Duk, she has lived in Melbourne for 18 years and is a professor at the University of Melbourne. She told us that we must visit Melbourne Central, a nearby shopping mall built in and around historical buildings, to see the clock that chimes every hour. It’s one of her favourite sites in the city. She used to go see the clock often when she first arrived.

A bit before 2 p.m, after we finished our meals, she said let’s go see the clock. She walked with us the two blocks to the mall. She pointed out the clock and said make sure to be in front of it at 2, now I have to go back to work.

After chiming the hour, a crescent-shaped section slowly slides down from the bottom of the clock. It holds several mechanical parrots and cockatoos and two minstrels, one holding a violin the other a flute. They play Waltzing Matilda with the birds softly calling in the background. The clock was as delightful as Duk and we would never have found it without her. 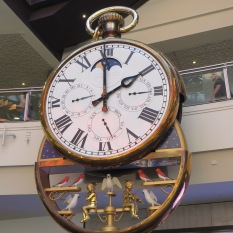 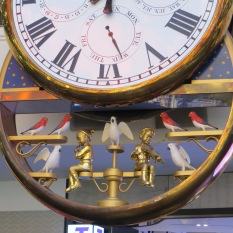