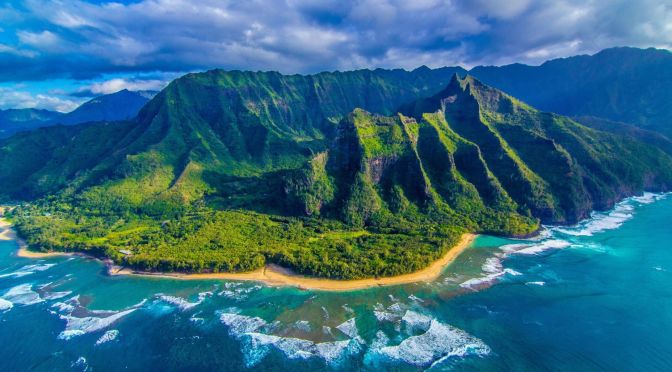 Hula dolls, Tiki torches and picture-perfect sunsets – does Hawaii come to mind? That’s where I’ll be in less than two weeks. Ken and I are flying to Maui. We’ll spend some time there and on to Oahu.

Hawaii has been on my radar since I was a teenager. Visions of endless beaches, steep verdant mountains and handsome islanders are some of the images I think of – inspired in part by the original Magnum P.I., not so much by Hawaii Five-0.

But there’s more. About three years ago, on one of our road trips, Ken and I listened to a fascinating book called The Wave by Susan Casey. If you have a chance to get this book, don’t hesitate. Clearly, it’s about waves: ship-destroying 150-foot rogue waves, Tsunamis, climate change and its impact on our oceans. It may sound like a textbook but it reads like a thriller thanks to… surfing. The narrative comes alive as the author follows big-wave surfers who seem more adapted to life on salt water than on land. She explores their intimate relationship with big waves and their adrenaline-fueled passion to surf them.

I’m rereading this fascinating book right now. I’m thrilled that we will be in Hawaii during winter, the big-wave season. It’s when tranquil snorkeling beaches turn into life-threatening no-go zones. It’s the season big-wave surfers thirst after.

So you won’t be surprised to learn that the first thing on my to-do-in-Hawaii list isn’t sipping umbrella drinks under Tiki torches while taking in a spectacular sunset, it’s watching the big-wave surfers – from a safe lookout onshore.

7 thoughts on “GOING TO HAWAII!”