Probably the activity I wondered about the most on this 15-day tour was the two-night stay at an indigenous Tharu village near Chitwan National Park. What would the accommodations be like? Would I be staying in a family’s home? Would I eat with the family?

One of the reasons we were going there was to visit Chitwan National Park, Nepal’s largest and oldest park, home to rhinoceroses, crocodiles, tigers and leopards.

After a long, dusty day of travel by train and bus from Varanasi and the formalities of crossing the border into Nepal, we arrived at the village of Barauli in the southern Nepal region of Terai around 5:30 p.m. The ladies of the village wearing traditional saris greeted us with the customary welcoming “Namaste” and placed tikkas on our foreheads and flower garlands around our necks.

After a few introductions, Ken and I were shown to our quarters, Teji house, a thatch-roofed house made of cinderblock that contained a comfortable bedroom and a full bathroom with hot and cold running water and a flush toilet. The room was nicely decorated with colourful bed covers, mosquito nets, which we were advised to use, two chairs and a mirror. There was electricity.

The open windows let in the village noises: chickens clucking, children playing and dogs barking. We could see villagers working in their fields.

As it turned out, the village stay was one of the highlights of the trip. The day of our arrival, we bicycled through the village and into the countryside to the nearby Rapti river, meeting elephants on the way. 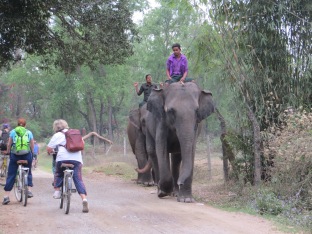 The villagers had just harvested elephant grass, a tall straw-like plant that can grow up to eight meters. It’s used for thatch roofs, building material, and for weaving mats, baskets, and other items. After the harvest, the ground must be burned to help the new crop grow.

The farmland is rich and yields three crops per year of rice, corn and vegetables. During our visit, farmers were busy planting rice, a cash crop for the village. Men plowed the flooded fields with oxen and wooden harrows and women planted the seedlings.

Janok, the village chief, accompanied us on the bike ride and he also took us for a walk through the village the next morning. He was charming and generously answered all our questions. The village is big and seems quite prosperous. There is a large school attended by children in neat uniforms. Boys and girls cheerfully greeted us as they rode their bikes to school.

We saw many new, brightly painted, cinderblock houses. There are also many traditional houses with walls made of elephant grass stalks lashed with woven elephant grass ropes. The structure is then coated with mud plaster that dries into a grey adobe-like finish. These buildings are high maintenance and must be replastered twice per year. 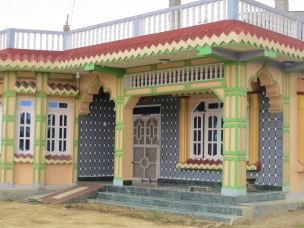 Most households had several animals, cows, goats, chickens and ducks. A few had a sheep. Recently harvested haystacks towered over the houses. They are cone-shaped and have a tall bamboo pole in the center. I asked Janok how they were built and how they hold together. He said they are on platforms so the hay doesn’t rot and ladders are used as they get taller. The top layer is tied to the pole using elephant grass rope. That way, the haystack doesn’t fall apart and it sheds the rain.

At Janok’s house, we met his wife, his mother, his daughter-in-law and his little grandson who obviously adores his granddad and wanted to come along with us on our walk.

On the morning of our departure, many villagers came out to wave goodbye. I was not the only one in our group who would gladly have spent another day in these pastoral surroundings.