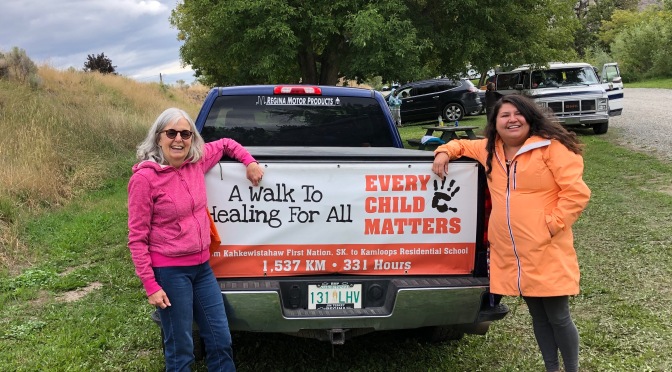 In Kamloops, I met Shayna Taypotat. She’s an indigenous woman from Kahkewistahaw First Nation in Saskatchewan. She had just finished an amazing trek of more than 1,500km on foot from her home to the Kamloops Residential School. She had come to pray over the 215 unmarked graves of children who died there.

Shayna and her crew were camped at the same campground as we were. I didn’t know about her project but I had seen a pickup truck on the roadside somewhere in Alberta with a banner across the back panel that read A Walk To Healing For All. Speeding down the highway, there was little time to figure out what it was all about. On the campground, I recognized the banner and stopped to find out more.

Her auntie told me that when Shayna heard about the discovery of the unmarked graves in Kamloops in May, she was overwhelmed with sadness. After a time, she was moved to do something and that’s when she decided to walk from Saskatchewan to Kamloops. She hoped to find healing through her walk and her presence at the site.

Shayna is a cheerful, energetic, glowing person. I felt her positive energy as soon as I met her. She was overjoyed and, I think, a bit overwhelmed to have completed her goal. She told me she felt her walk has empowered her to do more. She’s become determined to increase awareness around this issue that has changed her life.

Check out her FaceBook page. She’s already planning her next project.

And have a thought and a prayer for all those children, in Kamloops and elsewhere, who died so far from their loved ones in unfamiliar surroundings, and for their families who were forced to send their little ones away and then never saw them return.

2 thoughts on “EVERY CHILD MATTERS”