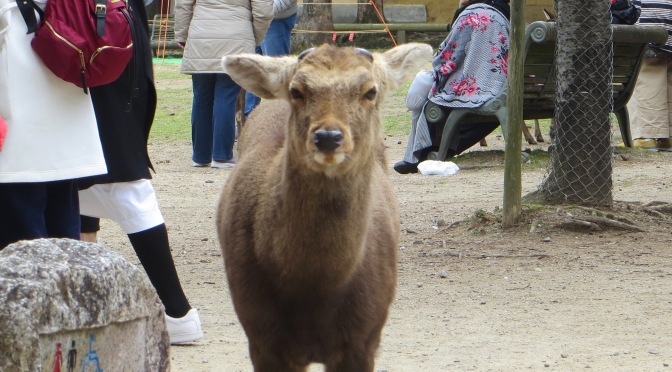 I wonder how well-known the city of Nara is amongst those planning a visit to Japan. I first heard about it following Max’s trip here in 2008. He had delightful stories about feeding the Sika deer that roam freely through Nara Park. He told us it was a must-see during our trip. We didn’t need much convincing.

Deer have the run of the town in Nara, but most are found in an area of Nara Park that’s about the size of three large city blocks. According to legend, an ancient mythological god arrived in Nara riding a white deer. Ever since, the Nara deer have been revered as heavenly animals and protected. Today there more than 1,000 of them.

Visitors to Nara can interact with the deer and feed them special crackers sold by vendors all over the park. The deer have a special talent to encourage us to feed them: they bow. Before giving one a cracker, you bow to the deer and the deer bows back. I was skeptical, but it’s true, they do bow. Some even bow preemptively to encourage feeding. However, they are wild animals and many signs are posted to remind us of that.

All four of us got into the action feeding the deer. Ken was the first to buy deer crackers. He was quickly mobbed by eager deer jostling each other hoping to be the one to get the handout. One even nipped him in the butt to get his attention. The rest of us watched, snapping pictures and laughing. The crackers didn’t last long and when he finished he was laughing along with us. 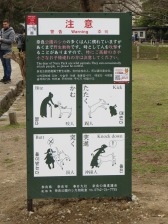 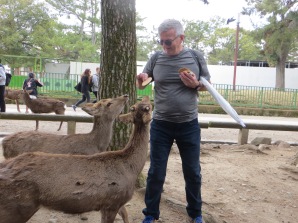 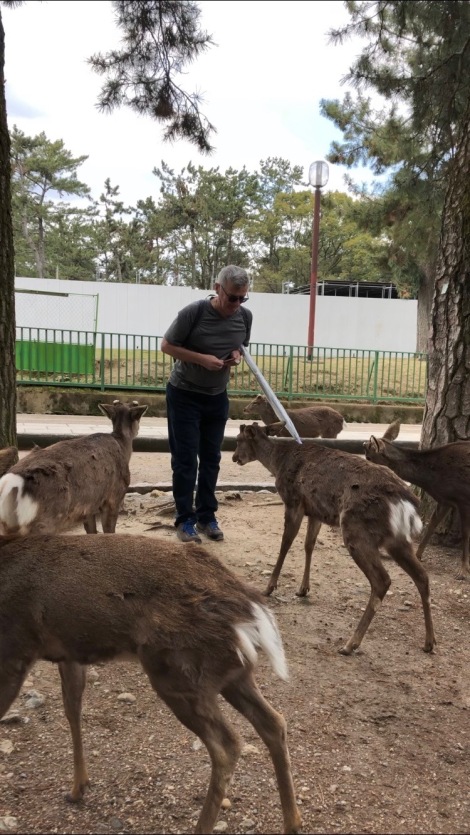 Ken and deer bowing to each other

I went second and found myself more popular than I’ve been since high school. It was amazing to bow to each deer and have them bow back. The cuteness factor is irresistible. One pulled at my jacket, I think he got a cracker but it all goes so fast. It was a lot of fun.

Max and Patrick were next. Seeing them surrounded by deer, I didn’t know which of my sons to watch. Max had one deer rear up on his hind legs to try to get closer. Patrick had a young deer actually kick him a couple of times – that individual still had a few lessons to learn in proper manners. Patrick was offended, but not really hurt. 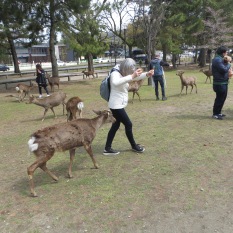 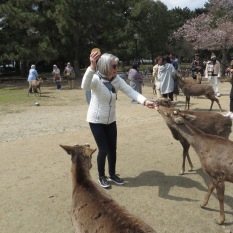 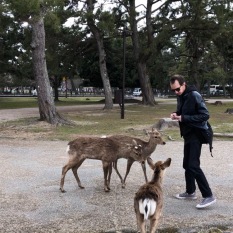 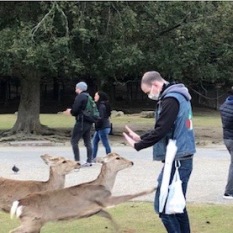 The deer understand another sign. They know that when you hold your hands out palms out you’re out of crackers and they walk away from you without so much as a final bow.

It’s fun to feed the deer but just as much fun to watch others do it. Some ham it up for their friends who are taking pictures, some try to take selfies with deer that won’t stand still, some pet them and others are afraid and squeal when the deer get too close. 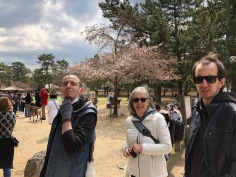 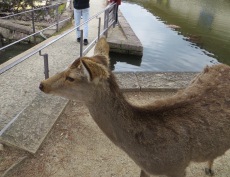 Max was right, Nara is a must-see on a trip to Japan.