Sometimes, luck yields the best experiences. On our first night in Hiroshima, we looked for a restaurant by walking along the main street near our rented house in a residential neighbourhood. Several blocks from home, I looked through the window of a small narrow restaurant and made eye contact with the chef, to the surprise of both of us. The place looked inviting but we walked a few more blocks before deciding to go back and have supper there.

Patrons looked at us with curiosity when we walked through the door. The restaurant felt like a local hang-out. The space is divided on the length, an open kitchen on one side, a long counter with stools on the other and at the back, a staircase going up. The kitchen was busy with four people behind the counter who all welcomed us in Japanese. “No English menu,” said the chef hurrying around the counter and pointing at two stools for us to sit. Along the edge of the counter, within reach of the kitchen, all kinds of food lay in large platters – I could name crab, squid, octopus and cuttlefish, bamboo shoots, mushrooms and tomatoes but many items were a mystery to me. There was more organ meat in this kitchen than I’ve ever seen.

Looking around at the focused activity in the kitchen and hearing the animated chatter of the patrons, we felt happy with our choice. A smiling waitress brought us beer and the chef cheerfully hustled over to show us two plates of gyoza, one fried, one boiled. Shingo is a compact man of about 40, brimming with energy. His passion for cooking is plain to see. The plates he showed us were not for us, but this show-and-tell was to be our menu for the evening.

We picked fried gyoza. Soon, small bowls of sauce were deposited in front of us and then a dozen gyoza for us to share. I enjoy good food, but I’m not a foodie. I can’t say what the little dumplings were stuffed with and the language barrier prevented me from asking, but it wasn’t the run-of-the-mill mix of pork and seasonings. They were the best gyoza I’d every eaten.

By now, the curiosity of those sitting around us overcame their hesitation. Two men, father and son, to Ken’s left started a conversation. They asked where we were from, if we liked the food, how we’d found the restaurant – it’s the best in town they claimed. Our exchanges were sprinkled with miming, laughing and raising of glasses.

While we ate, we watched the action behind the counter. Beautiful plates of sushi, tempura, grilled fish, bowls of rice and soups were quickly prepared, many taken up the narrow stairs to a group we never saw.

After the gyoza, Shingo showed us a large plate of sashimi, it was artfully laid out and my first thought was that it was too beautiful to eat.

We asked for one holding up fingers to show how many pieces we wanted and how many types of fish. We left the choice of fish to the chef. Once again, sauces were placed in front of us. Our plate arrived decorated with a flower and a branch of cherry blossom buds. The beauty of the plate transformed into wonderful flavours as we ate mackerel, tuna and sea bream.

Enticed by the plates of tempura we saw, we ordered vegetable tempura next. Chef Shingo offered marinated bamboo and some small new shoots of butterbur. He said they were a spring delicacy and we must try them. We agreed and asked him to include some of the big mushrooms from the bar in front of us. Once again, sauce was brought and soon, delicious tempura.

The evening ended with pictures of us and the two men we’d chatted with and with the Shingo. We had such a wonderful time that we determined to bring our sons when they joined us a few days later.

Father and son with Ken and Anne-Marie 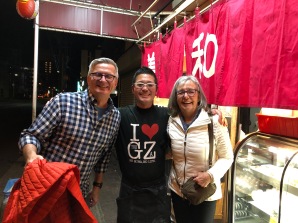 Trying to repeat a remarkable experience is always a risky enterprise. Fearlessly, four days later, we returned to the restaurant with Max and Patrick. It seemed even fuller than the first time and at first I thought there wouldn’t be room for us, but Shingo recognized us and asked some people to shift down the row of stools to make room. The rest of the kitchen team smiled and called out welcomes. Patrons turned to look at us and we felt welcomed.

Max and Patrick like gyoza, so we quickly ordered some, with beer of course. Two men sitting next to me soon started a conversation. They were bankers from downtown who came to this restaurant often, they insisted that it was the best in town. “How did you find it?” they asked several times.

Max asked them for food recommendations. They pointed to the plate they were sharing and recommended pigs’ ears. Max ordered a plate immediately – OK! adventures in food. The dish arrived: several pieces of boiled and seasoned pigs’ ears, presented on a bed of shredded cabbage. The cartilage was crunchy, but the taste was delicious. Our neighbours watched us eat. I suspect their recommendation was a bit of a challenge to us, fueled by their several glasses of beer and sake, and we rose to it.

They complemented us on our use of chopsticks then treated us to two dishes, tempura and steamed butterbur. Then they explained that the firefly squid in the platter in front of us were a delicacy only available in springtime and that we needed to try some. They tasted wonderful, reminding me of smoked oysters rather than squid.

Given their generosity, Max asked if I had anything with me that we could present to them as “omiyage,” small gifts exchanged in Japan. I didn’t, I had only brought one item for the chef. Max offered to return home to get some – about a kilometer away. He ran all the way while I maintained a conversation so our new friends wouldn’t leave. Patrick got in on it too, talking about his interest in Japanese anime, something that’s shared by people of all ages here. Max returned, a bit breathless, and we presented each man with a box of maple tea from Canada. They had not expected this and were delighted, thanking us repeatedly and treating us to a round of their favourite sake.

Later, as we left, we presented Shingo with maple tea as well – a gift he could share with his staff. He asked us to wait and quickly wrapped up nearly two dozen pieces of sushi and presented them to us. It was our turn to be overwhelmed and thankful.

We left Hiroshima the next morning. Riding the tram to the train station, we struck up a conversation with a Japanese woman who speaks very good English, She works at the tourist information center at the train station. I told her we’d eaten at Gyoza No Miwa. She suddenly looked astonished. “How did you learn about this restaurant?” she asked. “It’s the best in town!”

I guess we really did stumble upon the best restaurant in town.