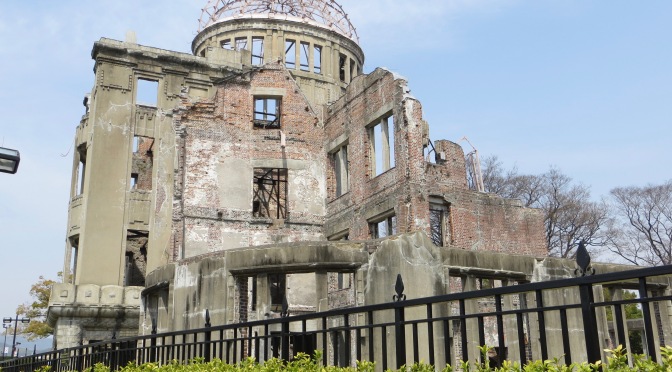 I really enjoyed Hiroshima. It’s a friendly, active town, although it’s a city of over a million people. Most tourists come here on a sort of pilgrimage to the site where an atomic bomb was used for the first time against humankind on August 6, 1945.

That’s the reason we came, too. Patrick, Ken and I spent the better part of a day exploring Peace Memorial Park. We began by walking around the A-bomb Dome, or Genbaku Dome by its official name. It’s a stark symbol of the event with it’s few standing walls and domed roof trusses, quite moving to see. In the rest of the park there are monuments and memorials erected over the years to acknowledge the explosion of that terrible bomb and honour those who died as a result.

Cenotaph for the A-bomb Victims by Ken

Ringing the Peace bell by Ken

Monument marking the exact location above which the A-bomb exploded.

But the park is not a gloomy place. The day we visited was sunny and the park was busy with strolling retirees (local retirees, not us), and young mothers picnicking with their toddlers. The cherry blossoms were on the verge of exploding into colour but there was already a riot of colour from the thousands of origami cranes strung together and hanging around the various memorials. The cranes have become an international symbol for peace and they are everywhere here.

In an out of the way corner of the park we found an earth mound about 12 feet high. Several stone lanterns called Dai-doro stand nearby. Here are buried approximately 70,000 unidentified victims of the bomb. This spot seemed particularly poignant to me.

We ended our visit at the Hiroshima Peace Memorial Hall. A 30-minute video presents testimonials from people who survived the blast. Most were parents of young teenaged girls who tell of the death of their daughters. The girls attended a school where four out of five were killed by the explosion. It was a powerful and heart-wrenching presentation that wrapped up with the words of one mother who said she was able to carry on after her loss because she believed her daughter’s death and that of her friends became the path to peace. Her words help me understand better how the people who live here have recovered from that tragedy and rebuilt their city into what it is today.

The story of Sadako Sasaki explains why the origami cranes have become an international symbol of peace.