What could be better than sitting on a spectacular, internationally-renowned beach watching some of the best surfers in the world compete right in front of our eyes? It was like watching magicians of the waves performing just for us. They are so at ease in the water. I didn’t get close enough to see if they’ve got webbed feet, but they might…

Over and over, we watched surfers drop down the face of a wave 10 to 12 feet high and disappear into the barrel it created. Each wave was different; each rider had his style. If it was a good wave, they would disappear inside the barrel for a few seconds then come out the other side still standing. Many ended their run with a flashy move doubling back over the lip of the wave to rejoin the line-up, earning extra points. A good ride had people on the beach cheering and clapping, not that the surfers could hear us. 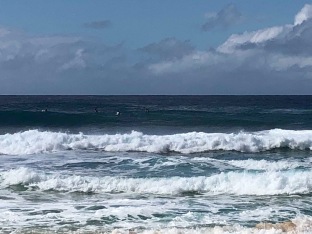 We were watching the Volcom Pipe Pro 2019, a competition that drew 144 surfers from all over the world. Over four days and in heats of four at a time, the field was whittled down to the top four for the finale. We spent two days watching them surf and saw Jack Robinson of Australia receive his winner’s laurels in the form of a palm frond crown, plus some cash of course. Local son, Barron Mamiya came in second.

The annual competition is always held here, at the surf break know as the Banzai Pipeline at Ehukai Beach Park on Oahu’s North Shore. It’s one of several held at Pipeline during the big wave months of winter. It was thrilling to be here during one of them; I couldn’t have hoped for better.

The competition is broadcast live. To get the footage, several cameras are located on shore, including two mounted on long booms. A drone hovers overhead. One cameraman is in the water actually swimming to get his shots and another rides on one of the two jet skis of the Ocean Safety team who are there to help the surfers in case of an emergency. The cameraman on the jet ski was Larry Haynes, our “landlord” – by coincidence we had rented an apartment from him for our stay on the North Shore. It was a blast to watch him and his driver perform in the mountainous waves, keeping the jet ski a safe distance from the surfers but close enough to get the footage that was used for judging and that we later got to watch on TV.

Larry is an accomplished photographer, videographer, waterman and surfer. We learned a lot from him about the competition, surfing and the North Shore. He truly embodied the Hawaiian culture of Aloha with his warmth and friendliness.

I don’t have pictures of the action, that’s way beyond the capacity of my humble camera, so the best way for me to share it with you is through this link: Volcom Pipe Pro highlights.

Getting to see and learn about surfing has definitely been a highlight of our visit to Hawaii this winter.

2 thoughts on “Pro surfing as a spectator sport”