Lillian hails a taxi on the street. Before getting in she leans into the open front window. She tells the driver where we want to go and asks if he’ll take us, because drivers are entitled to refuse the fare. Then she asks how much, because passengers are entitled to refuse the cost, or negotiate a better one. We check with each other to see if we agree. Negotiations completed we hop into the back seat and off we go. That’s when the fun starts.

“What’s your name?” “Where is your village?” “Are you married?” Lillian asks in a mix of English and pidgin Nepali. The drivers are usually surprised by her knowledge of the language and happy to talk about themselves. Nearly every ride ends with the driver giving her his phone number and saying call me anytime if you need a taxi.

Intersection, not at rush hour 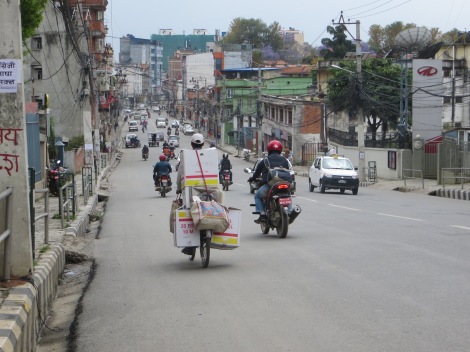 Our most fun ride so far was a long one to a suburb called Buddhanilkantha. The friendly driver, Yogesh, is a fan of old country music. When we got in, the song that was playing on his surprisingly good sound system was Islands in the Stream (Dolly Parton and Kenny Rogers). Lillian and I cheerfully sang along. That delighted him and he selected several more of his favorites for our entertainment: You picked a fine time to leave me Lucile (Kenny Rogers), Hotel California (The Eagles), Lady and The Gambler (Kenny Rogers). Yogesh speaks good English and over the music we talked about his life, Nepal, Canada, and marriage. A lot of the talk turned into jokes and bursts of laughter.

Naturally, when we came back from Buddhanilkantha, we called Yogesh for the return trip.