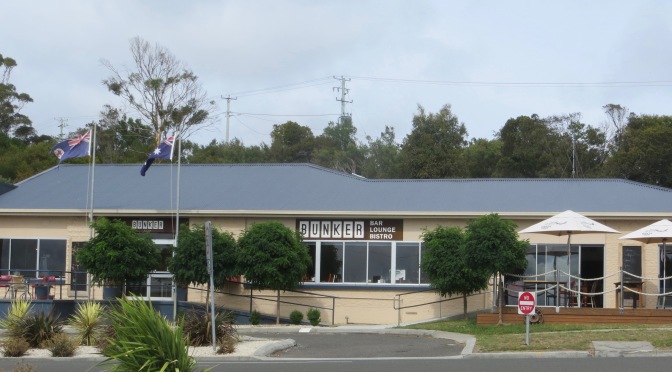 The beauty of traveling with a camper van is that you can stop anywhere you want and your home is right there. You can even park on a street and spend the night, which is what we did for two nights after picking up our rental van. But on night three, we needed power to recharge the batteries and our various devices.

From the beautiful east coast of Tasmania with its magical beaches we headed west across two mountain ranges covered in rainforests. The roads are barely wide enough for two cars to meet, winding, steep and fun to drive, but not so much in a camper van. The scenery is spectacular, valleys dotted with farms and mountains covered in dense vegetation.

Once we’d driven as far as we wanted to go for the day, we stopped at the historic inn in Weldborough, a town formerly populated by Chinese labourers who worked the local tin mine. The inn is nearly all that’s left of the town and it has a campground, but no power. You’ll have to go to Bridport for that, said the lady at the inn. I hadn’t seen Bridport on my map and assumed I misunderstood the name of the town but I didn’t want to ask her to repeat it a third time.

Down the road we went. Branxholm has a campground, but no power. We headed for Scottsdale, a bigger dot on the map, surely there would be a campground with power there. There is one, but no power. At the local grocery store, we were told we’d have to go to Bridport. Bridport again. Where is that on the map? Down the road, 20 km. Well, actually up the road 20km, all the way to the north shore of the island! Not where we had planned on going.

After driving an extra 100km that day, we finally arrived in Bridport, a small town of 16,000 people, only to find the campground office closed. Now what? As we considered our next step a man called to us from across the road. “I’ll just finish my tea and be over in five minutes.” Tea means supper hereabouts. We were happy to wait.

Rodney manages the town’s campground of over 250 sites. It’s the largest in Tasmania and has a fabulous location along the Bass Straight, the strait that separates Tasmania from the rest of Australia. He assigned us a waterfront site and chatted with us for about 20 minutes about how he’d like to visit Canada and how much he enjoyed visiting the U.S. Southwest, a place we visited too. 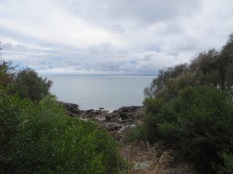 View from our site in Bridport 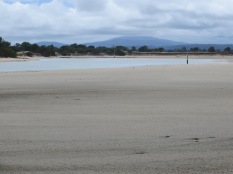 As is our habit, we asked Rodney where we should go for supper, specifically where he likes to go. He immediately said The Bunker – if they can fit you in, it’s Saturday night. We decided to take a chance, based on Rodney’s high praise.

When we walked through the door without a reservation, we were turned away. Looking around the restaurant, we knew we wanted to eat here. Can we wait? No room before 8:30 or 9. Can we eat at the bar? The bar is not set up for that. Can we take a chance, have a drink at the bar and see what happens? If you like… Dion, the maître D and sommelier, showed us to the bar and chatted with us when he could. Built like a quarterback, he seemed to be everywhere at once making sure everything ran smoothly. About 15 minutes later, he showed us to a table – fortunately for us, someone had cancelled.

We had a fabulous meal starting with the Australian specialty Oysters Kilpatrick, baked oysters with bacon and cheese, which Rodney had recommended. Then Ken had The Bunker’s Kombi platter, a selection of fresh seafood, and I had Chicken and scallops in a tarragon sauce. We ordered a Tasmanian white wine. Everything was amazingly delicious, not what we expected in a small town like Bridport. The Bunker operates in the ex-servicemen’s club, like our Canadian Legion. The atmosphere is friendly and welcoming. On a Saturday night, it’s full of locals, families, and visitors from away, like Tim, a congenial patron from Melbourne with whom we chatted about Australian wines.

Sometimes an extra 100km can bring the most agreeable discoveries.