We’re in Tasmania, the island state of Australia. We’ve come here to hike the Three Capes Track, a 46 km trail on the southern Tasman Peninsula. It starts from a beach and traverses rainforests, eucalypt woodland, coastal heathland, and climbs rocky cliff tops with dizzying vertical drops to the sea. Only 48 permits per day are issued for the Track; we reserved our spot last November.

Along with our fellow trekkers, we gather for the start of the trip on a windy, overcast morning. First up, a 1.5-hour boat ride along the imposing sea cliffs of Port Arthur Bay. We spot seals, nesting cormorants, and a pair of sea eagles, a lucky sighting according to our captain, before the high winds cut our tour short. We’re dropped off at Denmans Cove, a small bay where, due to the wind and sea conditions, the boat is unable to beach and we must remove our boots and wade to shore through the cold water.

A taste of the Tasman Sea

Over the next four days, we see sights unlike anything in Canada. Eucalypt trees two hundred feet high or more, tree ferns as tall as palm trees, mossy rainforests where fallen trees are two metres in diameter, and impenetrable, wind-scoured shrubs crowding the trail. Along the way, I imagine what it must have been like for the first Europeans who set foot here, what did they think? How did they deal with this overwhelming vegetation?

Fern trees in the rain forest

Into the rain forest

We see wildlife too. Wallabies everywhere and completely unafraid. They graze along the edge of the trails, glancing up at passing trekkers with mild curiosity, probably wondering why we’re there. At one of the cabins, a bushtail possum inspects the patio looking for snacks trekkers might have dropped. At another, the resident black tiger snake sleeps in the sun. It’s the sixth deadliest snake in the world; we give it a wide berth. Along one trail, an echidna, snuffling about in the dead leaves with its little snout, totally photogenic. We spy green parrots and hear many birds we’re unable to spot in the tall trees. 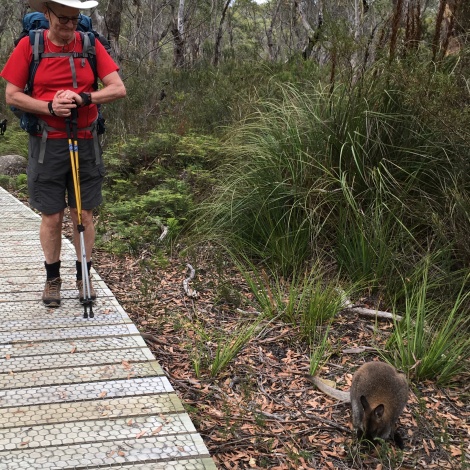 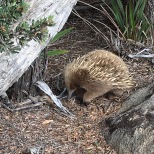 But the true stars of the show are the sea and the sheer dolerite cliffs. The Tasman Sea is a wild place that has challenged seafarers for centuries. It crashes into the cliffs in swirls of turquoise and glistening white froth. Dolerite is a type of stone dating from the Jurassic period 185 million years ago. It has distinctive polygon-shaped columns several meters wide. As the sedimentary rock around it erodes, the columns are exposed leaving spectacular rock formations rising like towers out of the sea, to our wonder and delight. 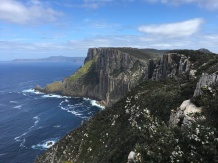