I read War and Peace when I was 13. It brought Czarist Russia to life for me and to this day I can easily imagine scenes like a gala ball at a prince’s opulent mansion or couples arriving to that ball in a troika piled high with bear furs to keep them warm against the Winter cold. I can also imagine the devastation of the battlefields of the Napoleonic Wars, especially during the brutal Russian winter.

Having lived with these images since I was a young girl, it was very exciting for me to be in Moscow. I knew that I would not see the Moscow of War and Peace but I was keen to discover the city.During our visit, we loitered in Red Square taking in its size, the bustle of activity and the grandeur of the surrounding buildings. We walked through the warren that is St. Basil’s Cathedral and learned that it’s not one church but nine, the central one completed in 1561, and most of them erected in honour of a victory in battle. They’re all interconnected by narrow, maze-like corridors. 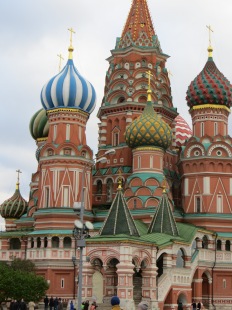 We visited the Kremlin. Originally, the word kremlin meant a walled enclave that protects a city. Most old cities in Russia have one. Moscow’s is walled but when we refer to the Kremlin today we’re likely talking about the seat of Russian government. I was a bit surprised that we can enter the area, accompanied by a guide, of course.

Inside the walls, we saw the palatial Senate building dating from 1776. It houses administrative offices including President Putin’s. We also saw several ancient churches used by the Tsars and their families before heading to the Armoury and the amazing collection of artifacts on display there.

In this museum, where photographs are prohibited, I got to see the dresses, jewels, regalia, weapons, housewares and horse-drawn carriages described in the pages of the War and Peace. It all came to life for me and I was overwhelmed by the beauty and opulence of the collection. By the end of our visit, I was literally speechless. 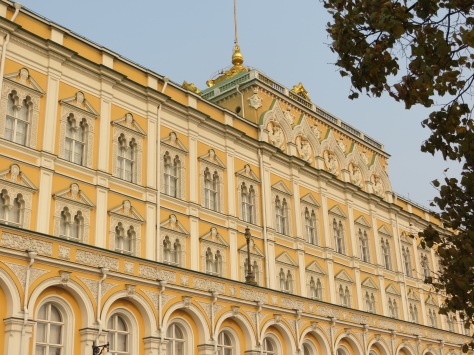