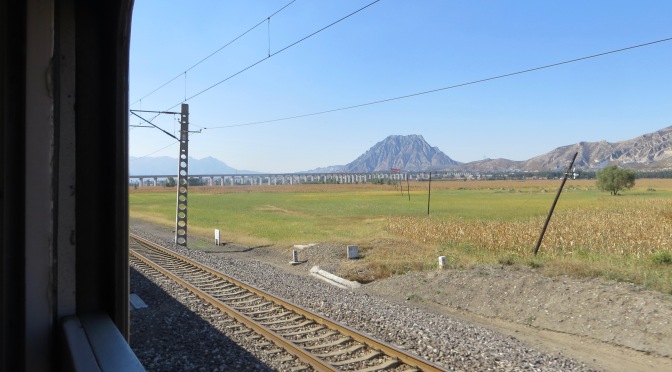 The first leg of our train journey to Saint Petersburg started at the main Beijing train station, heading to Ulaan Baatar. Duration of this leg – 30 hours – the wheel sets of the train, called bogies, must be changed at the Mongolian border because the gage of the railway is different in China than in the rest of the continent.

We arrived at the Mongolian border at about 10 p.m. Chinese officials boarded the train and collected our passports. These were taken, under escort, to an office in the train terminal and we didn’t see them again for three hours. What kind of security check they do when you’re leaving the country is beyond me.

During that time, the train is pulled into a nearby shed to change the bogies, the procedure lasts about two hours. Each car is decoupled. Hydraulic lifts raise the car off the ground about three meters and the Chinese bogies are pulled out from under the car as the European bogies are wheeled in. Then the car is lowered onto the new bogies and they are attached. Passengers get to stay on board and can watch the whole process. 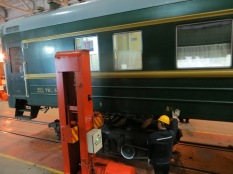 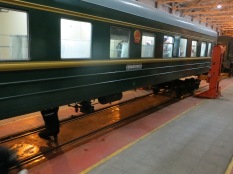 The cars are then hooked onto the Mongolian engine and dining car and the train returns to the station. About an hour later, the Chinese officials returned our passports and the train departed.

About an hour later, Mongolian immigration and customs officials boarded the train to conduct their verifications. Around 3:30 a.m., finally, we were able to get some sleep.