On our first full day in Beijing, we did a quintessential tourist thing, we dined on Peking Duck. It’s a must-do, but bring your wallet, it’s one of the priciest food in town.

After Ken wiped black bean sauce from his chin and I dodged the family bearing down on me, we agreed that our Peking Duck meal had been outstanding. That is, we enjoyed it immensely despite eating it standing in the street. Yup, we found a shop selling Peking Duck from a take-out window.

Peking Duck is prepared according to a centuries-old method that guarantees the meat will be moist and flavourful and the skin intact and crispy. Traditionally, it is served sliced paper-thin accompanied by rice pancakes and various sides and condiments. To eat it, place a few slices of duck on the paper-thin pancake, add condiments and vegetables, roll up and savour. I’d read that only a few restaurants still prepare it in the traditional manner and a meal at one of these can be expensive by Beijing standards.

We ate ours from a take-out window in Nanluogu Xiang Street. We were trying to find our way back to our hotel after a long day of being tourists when we stumbled upon this popular shopping destination in a traditional hutong area. The narrow street is lined with shops selling jewelry, souvenirs, shoes, designer clothes, decorative housewares, gaming gear and trendy Japanese items. Then there are the restaurants, some sit-down, most simply counters selling street food. On this beautiful early evening, the street was full of people and the atmosphere festive with groups of friends, couples, families and tourists strolling about. 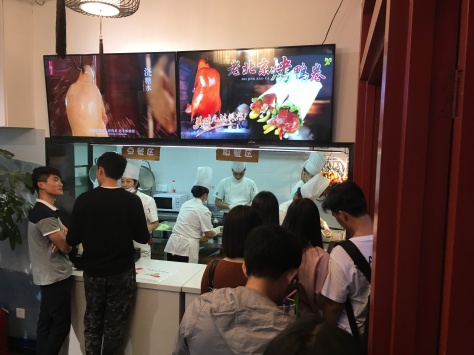 We were enjoying it all when we spotted a shop with Peking Ducks hanging in the window. A carver was slicing the duck into thin slices, according to tradition. He was piling them on a platter and the woman next to him was using them to make wraps. She used pancakes about the size of a tortilla, added duck, juliennes of bamboo shoots and cucumber, black bean sauce and then rolled them up in wax paper. We debated the risks of eating raw veggies, and decided to go for it. We ate them standing across the street from the restaurant watching the action. The line-up at the restaurant never slowed and the ducks kept coming. As Ken said, it’s never a good time to be a duck in Beijing.

Hutongs date from Beijing’s medieval times. They are alleys and laneways lined with houses built out of the rubble left by Genghis Khan when he conquer the city more than 800 years ago. Homes are grouped around inner courtyards often dominated by large trees. Neighbours gather on doorsteps to chat, play chess and take their meals in a true community atmosphere.