Contrary to Bugs Bunny, we did turn left in Albuquerque and began heading homeward. We had over 3,000 km (1,800 miles) ahead of us. What new discoveries awaited?

We spent a week making our way back. Along the route, we found some beautiful natural sites, some quirky roadside attractions and even a pirate ship on the Interstate.

In Santa Rosa, NM, we went to The Blue Hole, a crystal clear spring-fed lake that’s 25 metres (82 feet) deep, about 18 metres (60 feet) across and a constant 17 oC (62oF). There is a rock formation on one side that makes a natural diving board for those who want to jump in, like Ken did. 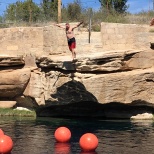 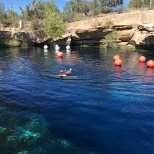 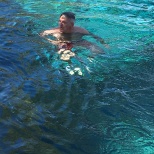 In Amarillo, Texas, we stopped at Cadillac Ranch: ten Cadillacs half buried in a cornfield, tail fins in the air. Initially all the same colour, they are now covered in graffiti. Visitors are encouraged to bring their spray cans and indulge their creativity. The Ranch was created by the Ant Farm, a group of architects and artists active in the 70s. Do you see the boy sitting on one of the cars? 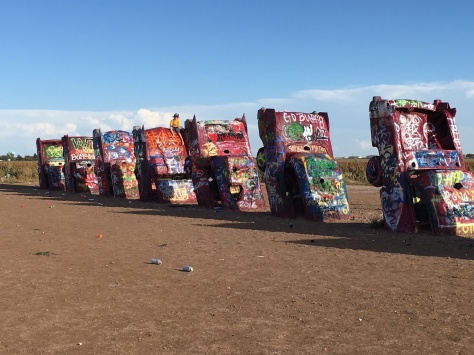 In Big Cabin, Oklahoma, we gazed upon the Big Indian, over 15 metres (50 feet) tall. He watches over a truck stop that offered edible insects in its snacks section. 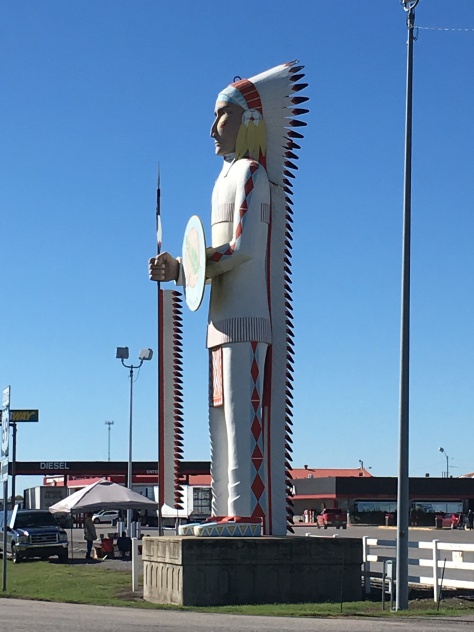 In Rolla, Missouri, we visited with Ronan, Ken’s nephew. Though we speak on the phone from time to time, we hadn’t seen him in nearly 15 years. It was really nice to catch up. He brought us to a popular Mexican restaurant for supper, El Jimador. The food tasted just like in Mexico and was delicious.

Finally we crossed back into Canada at Sarnia. The agent at the border seemed really interested by our trip and asked several questions about which National Parks we’d visited – definitely “off script.” By the end of the next day, we were safely home with a whole set of new memories and a great feeling of accomplishment.