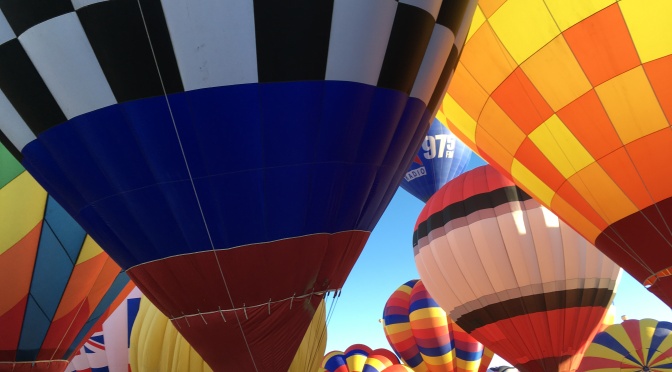 To attend one of the premier events of the Albuquerque Balloon Fiesta, the largest balloon festival in the world, you have to get up well before dawn, around 4:30 a.m. By 5 a.m., traffic is backed up onto I-25 and police and volunteers are directing cars to parking areas. Men, women and children stream into Fiesta Park with eager anticipation; it’s not even 6 a.m. and it’s cold – the sun won’t be up for more than hour. But it’s worth it!

The Mass Ascension will see about 800 hot air balloons take to the sky in the space of about an hour and a half. They are preceded by the Dawn Patrol, 12 intrepid balloonists who will take off in the dark to test the wind currents for the benefit of the other pilots.

The Dawn Patrol is the pre-show. They inflate in the dark and once they turn on their burners, their balloons light up in what is known as a “glow.” They even manage a choreography to play off one another. It’s spectacular. 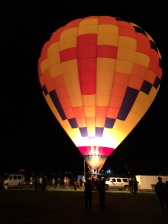 Just as the sun crests the Sandia Mountains to the East, hundreds of balloons begin to inflate and ascend. Row upon row of balloonists prepare their gear and set giant fans to begin inflation. Soon the crews can begin using their burners to heat the air inside the balloon and get lift. The balloons are so close they gently bump into each other as they fill. Once a crew is given the OK by the marshals, it’s off into an already crowed sky. Immediately, their spot on the ground is taken by another team eager to get its craft aloft. It’s like a kaleidoscope of colours on the ground and in the air. It’s organized mayhem and it’s wonderfully delightful.

I got to speak with balloonists from France, Germany, Ontario and Quebec, each one thrilled to be part of this event. Spectators can wander among the balloons and stand right in the middle of all this craziness. What a fabulous show! 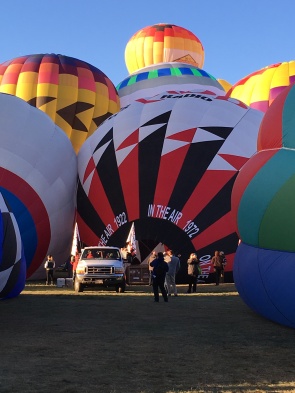 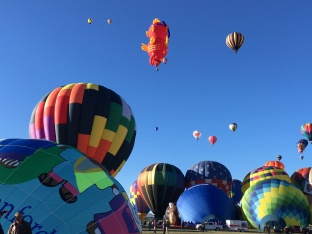