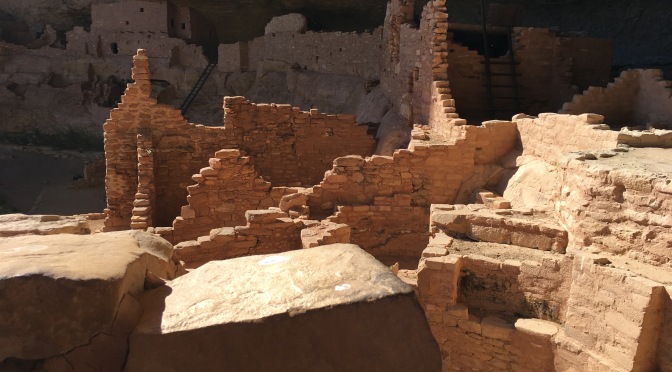 I have been fascinated by the Ancestral Puebloans since my university days. Why did this ancient civilization of the Southwest build entire communities in alcoves on the face of sheer canyon walls 800 years ago and then abandon them?

Mesa Verde National Park was established in 1906 to “preserve the works of man;” the first national park to incorporate this mission. It has nearly 5,000 Ancestral Puebloans sites, many of them cliff dwellings.

To give you a bit of context, the Ancestral Puebloans began living in the Mesa Verde area, in southwestern Colorado, around 550 A.D. At first they lived, farmed and hunted on the mesa-tops, but in the last hundred years that they lived there, they moved to cliff dwellings. Somewhere around 1300 A.D. they moved south, abandoning their homes. No one knows for sure why they moved, maybe due to conflict, maybe due to drought and the depletion of local resources. The dry, high desert air has preserved the Mesa Verde sites in remarkably good condition, in particular, the cliff dwellings.

The highlight of our visit was the day we went with Larry, a historian and guide, on a hike to view Spring House, an isolated cliff dwelling that is the largest unexcavated site in the park. It’s not otherwise open to the public. We knew we would not be going into the site, only viewing it from a specially-built platform.

The site has a tower that’s four stories high and dozens of rooms. Looking at the site, I imaged what it must have been like for the people who lived there. I thought about how they had to scamper up and down the cliff face to get to their homes, probably carrying crops or meat, building material like wood or stones, maybe even their children; how they would have sat looking out upon the views of the canyon floor, the mesa across the way and the spectacular sunsets while they ground corn for bread, wove clothing out of yucca or dressed animal skins; how they must have kept their fires burning to keep out the winter cold; how they preformed their ceremonies and held social gatherings on the edge of sheer drop-offs. What were their hopes, their aspirations? What would life have been like for me if I’d been there?

We later visited Far View Sites, mesa-top sites that showed us the evolution of habitation in the area. We saw the famous Cliff Palace; with 150 rooms and 23 ceremonial “Kivas” making it one of the largest.  (It’s currently closed to visitors because of recent rock falls.)

Accompanied by park rangers, we entered Long House and Balcony House, two remarkable cliff dwellings 90% unrestored. When you’re there, among the stone structures, you can practically feel the presence of the ancient people. You can see handprints in the mortar of mud and straw used to fill in the spaces between the stones of the walls. You can see the blackened ceilings marking where fires had been, you can step on the same stone steps used by the ancient Puebloans, worn down by use.

Ken and I spent four days camping in Mesa Verde National Park. Visiting Mesa Verde was something I’d looked forward to for many years and it lived up to everything I expected. 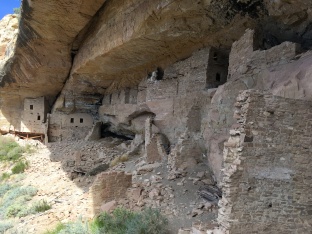 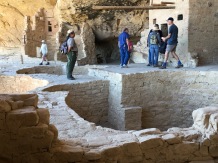