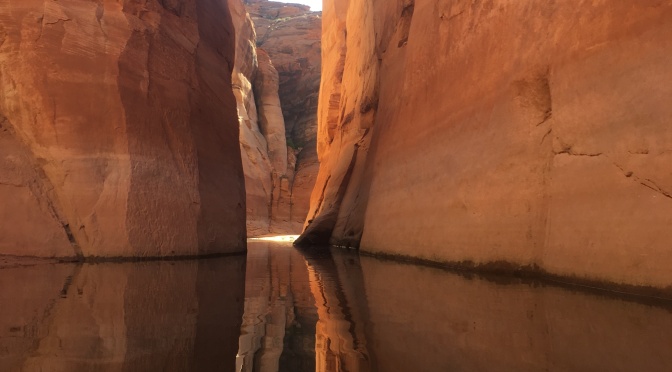 One of the places I heard about the most before leaving on this great Southwestern tour was Antelope Canyon and what everyone said was “You’ve got to go.”

Tours to Antelope Canyon, probably the most famous of all slot canyons, leave from Page, Arizona, a small town on the Utah border. The canyon is on Navajo land and can only be visited accompanied by a Navajo guide. As you drive into town, numerous billboards advertise the handful of tour companies.

Researching these tours, I found that they are generally crowded. Many people report feeling that they were not given the time to appreciate the natural beauty of the area. I tend to steer away from such crowd scenes. I decided to look for alternatives.

What I found was a kayak tour offered by Hidden Canyon Kayak that takes you into Antelope Canyon from Lake Powell. Lake Powell is the name given to the great reservoir created by the Glen Canyon Dam. Completed in 1966, the dam flooded Glen Canyon and dozens of side canyons creating an incongruous combination of a vast body of water within an arid desert landscape. The clear blue water laps against imposing red rock cliffs. The opportunity to kayak in this beautiful, artificial environment was irresistible.

Once Ken and I were settled into our double kayak, we headed out with our guide Craig. We paddled northwest along the shore of the lake until we arrived at the mouth of the canyon. Then we paddled up the spectacular canyon as it got progressively narrower and the walls steeper. Craig provided us with information about the geology and the environment of Lake Powell along the way.

Finally the water ran out, we were at the limit reached by Lake Powell’s floodwaters as they flow up the canyon. That limit changes from year to year. The water level in the Colorado River and the lakes created by its dams, Lake Mead, Lake Powell and Lake Havasu, depends heavily on snowmelt from the mountains to the North and East. There has not been much snow in the past few winters and so the lakes are low. Lake Powell has a “bath tub ring” or high water mark that is about 60 feet above the level of the water we were paddling on.

We abandoned our kayaks on the shore and walked up the spectacular canyon as it got narrower and narrower. Every step revealed striking and unique views. The shapes of the walls tell of the water and wind that has scoured the canyon for centuries. There are pockmarks and bowls, whirls and cavities, dips and bulges.

As peaceful as it was, I could imagine the wild energy of a flash flood invading the canyon with a surge of dirty water carrying boulders and trees, banging into the walls of the canyon, reworking the shapes, leaving new scars on the sandstone and redesigning the canyon floor.

On our paddle back to the dock, we crossed paths with other kayakers, personal watercraft, motorboats and two large tour boats bring visitors into the mouth of Antelope Canyon, as far as such vessels could go. It had been a real treat to have the canyon to ourselves all morning and well worth the chilly, early morning start. 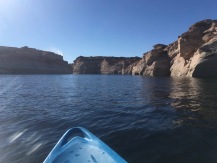 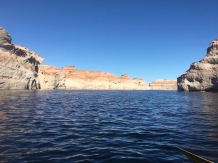 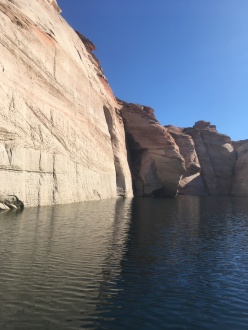 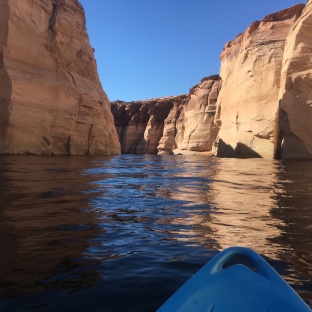 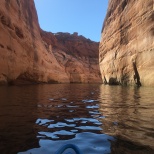 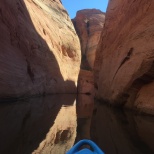 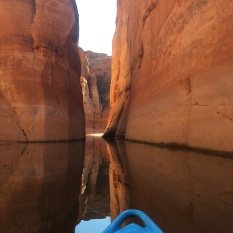 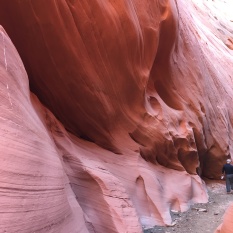 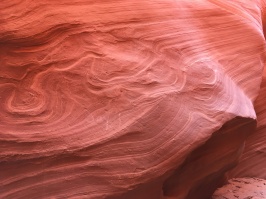 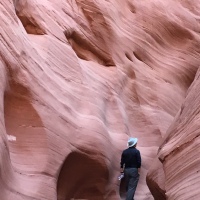 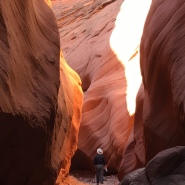 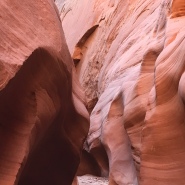 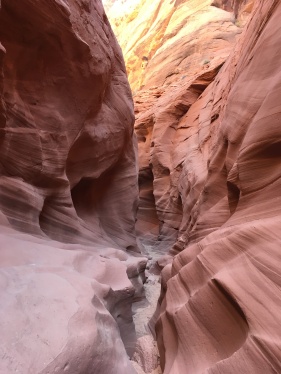