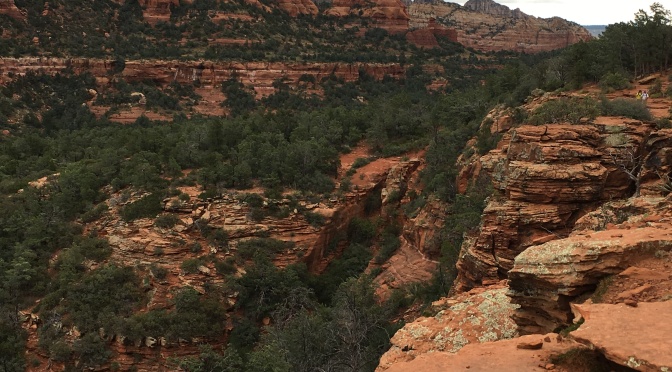 I had formed an impression of Sedona before I got there. A beautiful natural setting, a stodgy retirement community that exudes money, a place that’s touristy and over-hyped. My impression was only partly right. It is many of those things, but it’s more, too.

Sedona is nestled among red rock cliffs, buttes and mesas. It’s an impressive setting and so is the road to get there, the 89A. The road weaves through those buttes and mesas with hairpin turns and steep hills. It’s the most direct route coming from points north and it’s an exhilarating drive.

Arriving at the hotel, I was once again reminded that there are ties to Canada everywhere. At the front desk we met Jerry, a fellow guest who once owned a wilderness resort on Vancouver Island. He was pretty familiar with Canada. He met his wife while running the resort. She’s from Montréal and is French speaking. We later met Jeanne and what was her surprise when I greeted her in French to ask if we could join them for supper. Jerry and Jeanne were in Sedona celebrating Jeanne’s birthday. We had a great time over dinner sharing traveling anecdotes, life stories and thoughts on the Southwest.

Another pleasant surprise in Sedona is the hiking. There are over 100 hiking trails in the vicinity. At The Hike House, we met Mike, the owner, and asked him for suggestions for an outing. He recommended Devils Bridge. It’s special because you can walk out onto an arch. We chatted with Mike for a while, we talked about hiking in the Grand Canyon and the great backcountry hiking opportunities in the region. The Hike House is also a trail gear store and a coffee shop, the Energy Café. While browsing the shop, we had a coffee and an excellent cookie specially made by Mike’s wife.

This was not the Sedona I expected and it made me think that I’d like to return. 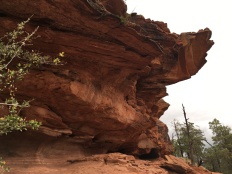 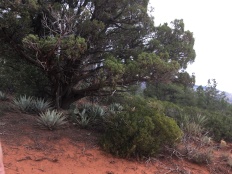