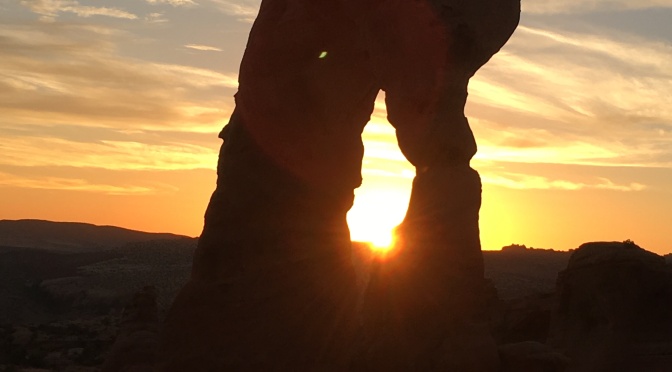 A classic in Arches National Park is the sunset trek to Delicate Arch. It’s about two miles with some significant climbing up a bulge of slick-rock. We headed out around 6:30 and made good time up the trail. There were a few other people around, but we were pretty much on our own. At first the trail is well marked. Then you need to follow cairns as you cross the bare slick-rock. Just before the top, you walk several hundred feet on a rock ledge with a spectacular and deep canyon to your left. You feel alone in the world amidst remarkable scenery: swirling patterns in the rock, deep crevasses, caves and canyons.

The ledge is the final approach to the Delicate Arch. It gradually curves up and to the right and you feel the anticipation build as you know you’re getting closer. Then suddenly, a few more steps brings you to a vista of … about 200 people sitting and standing on a wide ledge all waiting for the sun to set and the magic to happen. It was a startling surprise.

To the right, across a dip is the object of everyone’s efforts, the Delicate Arch. It seemed to rise above the hubbub of the crowd, serene and majestic on the horizon, waiting for the sun to show it off.

After the initial surprise, the crowd turned out to be a fun addition. Everyone was in good humour and they bantered with each other while watching the spectacle. From time to time, someone would wander over to have their picture taken inside the arch. The crowd was tolerant of such intrusion into the natural beauty, but if they stayed too long, applause would burst out, slowly at first then gaining momentum. It would gradually dawn of the person under the arch that their time was up and they would clear out. 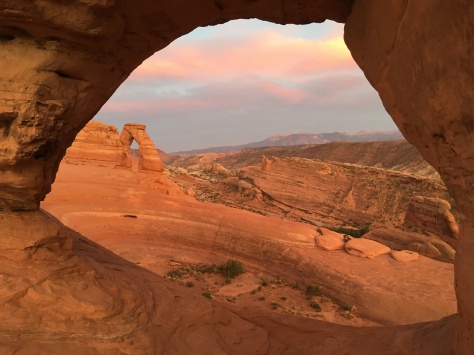